Home » As Boomers Age, 55-plus Communities Increasing in Central Mass.

As Boomers Age, 55-plus Communities Increasing in Central Mass. 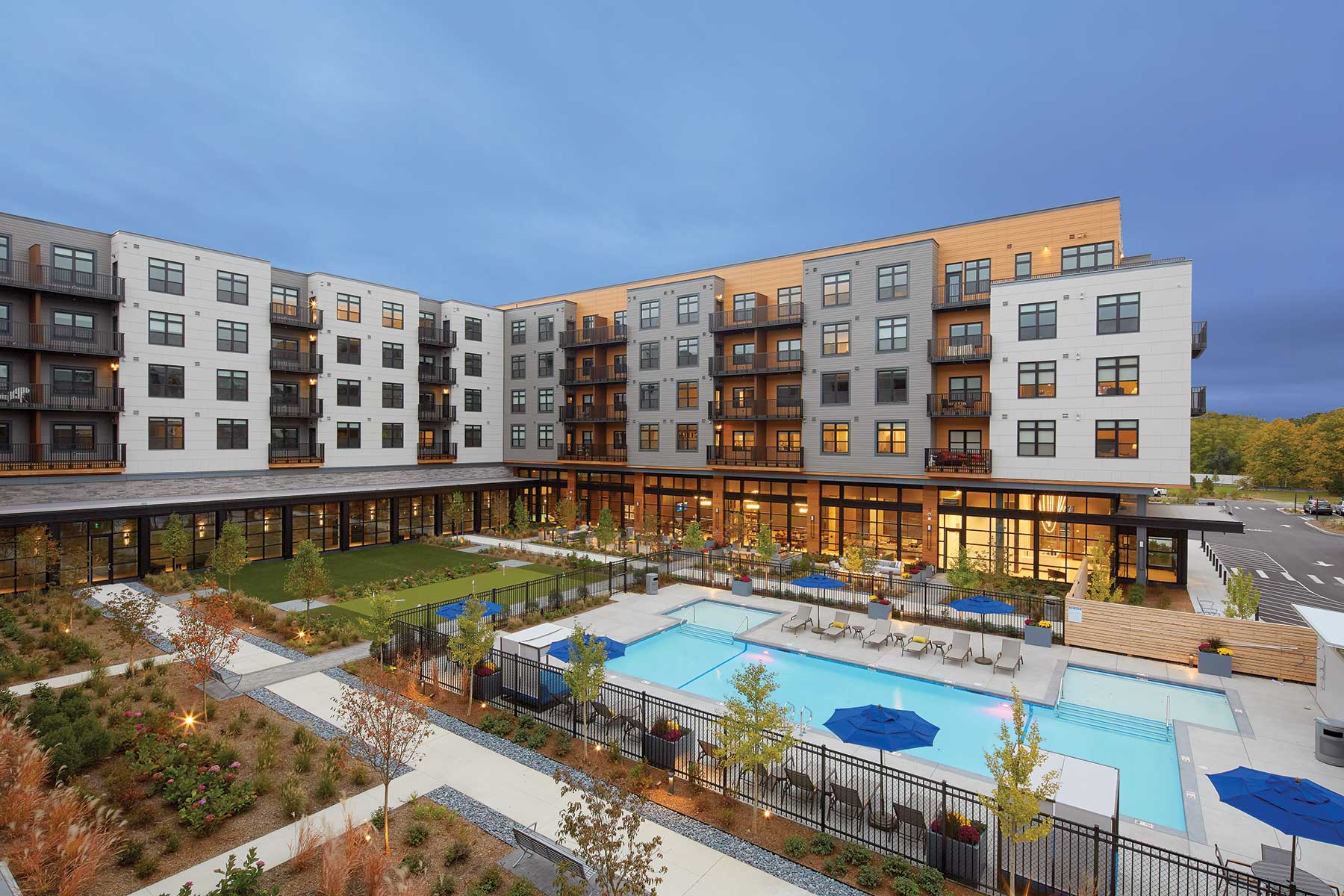 In just over a month of living at Avenu at Natick, Elaine and William Murphy have become friendly with other retired neighbors, thanks to a mix of activities at the new residential community meant to help them stay active.

“The socialness of it was a big sell for me,” William said. “I don’t know how my wife feels.”

“Being a social butterfly that I am,” Elaine quickly added. “This is nothing like we’ve had before. This is something that anyone would dream of having in retirement.”

The couple, which moved from Framingham, is part of an age group in the past might more often be snowbirds, trading cold Massachusetts winters for sunnier and warmer climates in places like Florida and Arizona.

But whatever may be keeping people close to home – family, a job, or all the region offers – Baby Boomers and other older adults are increasingly moving to dedicated communities where they can enjoy amenities tailored for them.

Communities built exclusively for those 55 or older are on the rise in Central Massachusetts, with a combined more than 2,000 units either underway or just completed. They almost always have a few things in common: Common spaces and amenities meant to foster a sense of community, and a lack of big yards requiring a lot of upkeep.

At Avenu, a community opened in October with 164 apartments, residents have use of weekly fitness classes, a putting green, a dining room and a kitchen able to be reserved for family gatherings. A bar offers continental breakfast each morning and happy hour drinks each afternoon.

Del Webb Chauncy Lake, set to open in February in Westborough, will have a full-time planner for social events, as well as a function ballroom, a fitness room and other features.

At Regency at Glen Ellen in Millis, a part-time lifestyle coordinator plans activities and sets a calendar of events. The community has a clubhouse with a gym and yoga room, an outdoor fire pit and bocce and tennis courts.
Such amenities have been drawing people in or nearing retirement to communities where they can get to know others in a similar stage of life.

“The socialization aspect of it is really important,” said Beth Mace, the chief economist at the Maryland-based National Investment Center for Seniors Housing & Care. “People want to be with other people instead of being lonely at home alone.”

With the youngest Baby Boomers now beyond 55, the growth of such so-called active adult communities is taking advantage of a population bubble.

According to U.S. Census Bureau estimates, 29% of Massachusetts residents in 2017 were 55 or older. That’s up from 25% about a decade prior, and a potential pool of nearly 2 million residents.

The National Association of Home Builders estimated by last year homes headed by someone 55 or older would constitute more than 45% of all American households.

A relatively new housing trend, active-adult housing has been evolving, too. It used to be primarily about having a first-floor master bedroom to eliminate having to navigate stairs, and small yards making upkeep easier.

Now it’s more often about finding social and fitness activities for residents who might be retirees itching for something to do and people to meet. Baby Boomers are more likely to stay active in retirement than the generation before them, Mace said, and they like to pack their calendars with leisure activities or things like cooking classes.

Active adult communities are becoming more common as a way to meet that need.

With so many amenities – combined with the high costs of new construction – living in these communities isn’t something everyone can afford.

Del Webb Chauncy Lake will start at $299,995 for a condominium, but others will be significantly higher, especially for standalone homes or townhomes: $541,995 at Regency at Glen Ellen, and $824,995 at Highcrest at Meadow Walk in Sudbury.

Adding needed homes
To help justify clubhouses and common amenities, these developments can sometimes be among the largest developments ongoing in the area.

The biggest 55-plus development underway in Central Massachusetts is the 700-unit Del Webb Chauncy Lake. The complex is being built on the former Westborough State Hospital site, with the first of an eventual 14 residential buildings set to open in February.

Residents will have access to leisure activities on Chauncy Lake, which the complex overlooks, as well as an 11,000-square-foot clubhouse where a range of activities will take place from card games to yoga.

Living aside a golf course used to be a staple of a typical retirement living. Now, ironically, with the declining popularity of golf, a few of these communities – Regency at Glen Ellen and the 129-unit Millwood Preserve in Framingham – are being built on former golf course sites.

Others are being built on what was largely underutilized land before, providing new residences at a time when few new homes are being added to the market.

The Lanterns at Warren Woods in Ashland has more than 90 units on a previously wooded site across the street from athletic fields and the Ashland Reservoir. Brooksmont in Holliston is on a wooded site behind what was a single-family home off Route 126, and 59 North Main in Sherborn has 12 units on site of an old dilapidated home.

Among the largest active-adult communities being built in the area, the Regency at Glen Ellen will have 324 units. More than 80 homes were sold in the first year of sales, said Pauline Teas, the site’s senior sales manager.
The property has been drawing mostly locals but also people looking to move back to be closer to family, from places like Arizona or the Carolinas, she said. What was at first another major draw when active-adult communities gained popularity – an easier lifestyle – has been replaced by an urge to be active, she said.

“When we first started out, we pushed maintenance-free living,” Teas said. “Now, people are looking for more.”