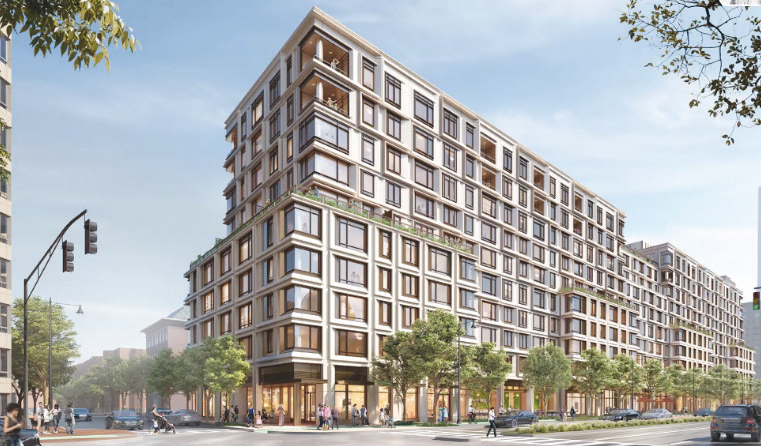 National Development unveiled its specific plans for the long-term development of the Midtown Hotel in a meeting with St. Botolph Neighborhood Association on Tuesday night – a use that will take over after Northeastern students vacate the existing hotel next spring.

National Development presented the plan to the general public for the first time on Tuesday, and plan to file their Project Notification Form (PNF) in the coming weeks.

Ted Tye of National Development appeared before a special meeting of St. Botolph Neighborhood Association (SBNA) on Tuesday evening to give a first public look of the plan and designs for the Midtown Hotel. That plan includes 325 rental apartments (42 affordable on-site) in a 10-story building that includes 17,000 sq. ft. of retail and 153 underground parking spaces. Additionally, there are a number of improvements to the sidewalk, traffic flow and alleyway proposed around the property.

Tye said having informal meetings with the neighborhood revealed they wanted something that matched the existing corridor and came in under current zoning – and that’s what’s been done as the project does not need any variances or considerations beyond the normal Article 80 review process.

“What I heard loud and clear is bring this back within zoning and make it conform to what was intended and that’s exactly what we did,” he said.

“We’d like to think of ourselves as really great placemakers,” he said. “Some of our projects have been transformative. The Midtown project is in need of a great transformation and we’re excited to be able to do that. We pay a lot of attention to quality design and we’ve been found to be good community partners. I say to my staff we’re only as good as our last project so we invite you to ask others about our last few projects.”

Some of those recent projects include Ink Block in the South End, which is about to finish its development track with its seventh building now under construction, as well as The Circle development in Cleveland Circle by Boston College.

At the Midtown, National Development is using Architect David Nagahiro of CBT – and they have quickly identified that the site is at the nexus of two incredibly different areas. Those areas include the urban, well-planned Christian Science Center in the front, and the charming, historic St. Botolph neighborhood in the back. They have approached the project early on in those terms, he said.

“These are two very different sides and we wanted to find the opportunity to mediate between the two – one a large urban side and one a modest historic scale,” said Nagahiro.

Added Tye, “It is a building with two fronts and transcends two neighborhoods and two neighborhoods that have a very different style. There are a lot of 19th Century brick designs, but we thought we could produce a good face to the St. Botolph neighborhood. We have actually pulled back and used that opportunity to create light and air and made that alley more of a place than a back alley. We see this as having two fronts.”

The building is largely designed with pre-cast pieces that appear to be limestone with bronze trim, having a new sidewalk setback to match the other buildings on the corridor, and a stepped back area further up about the fifth floor to create balconies and an aesthetic.

Tye spent a great deal of time talking about the improvements to the sidewalk, the new bike lane, signalization on Cumberland, a service road and improvements in the alley that will prevent trucks from backing up and beeping loudly in the windows of neighbors.

Part of that sidewalk activation will be retail, and many questioned what retail spaces would look like post COVID-19. Tye said they have scaled back the retail in the building and put active amenities on the first floor in place of what would have been retail. However, he said part of the branding of the building is having quality retail options on the ground floor that activate and enliven the street scape. That could take a lot more work than it did in the past with Ink Block or other developments. One thing he said he won’t do is put inappropriate retail in the new building.

“If we build a nice high-end building then retail has to be consistent with that product,” he said. “I look at Ink Block as a good example of that. We can’t do a project like this and have the retail be pizza, nail salons or a collegey atmosphere you might find further down the street. We’re not going to do that here. I’d rather sit with empty space than do that.”

There were also questions about the rental vs. condo product, and Tye said he felt there was a demand for new, high-quality rentals in the Back Bay area. However, it also has to do with the fact that National Development holds a ground lease with the Christian Science Church – and don’t fully own the land. That can be hard in a product that is for sale, but equates well to a rental product.

A key concern for St. Botolph neighbors is the fact that their view will be changed forever – as the smaller hotel will be replaced with a taller, 115 foot building.

“It won’t be the same thing as what you had before,” said Tye. “But it will have more light and more air in the alley. We’ve tried to be sensitive to that, but when you have new buildings that get built, it’s never exactly the same as before they were built.”

The SBNA will have its monthly meeting to talk more about Midtown and other neighborhood issues in a Zoom session on Tuesday, Oct. 27, at 6:30 p.m.