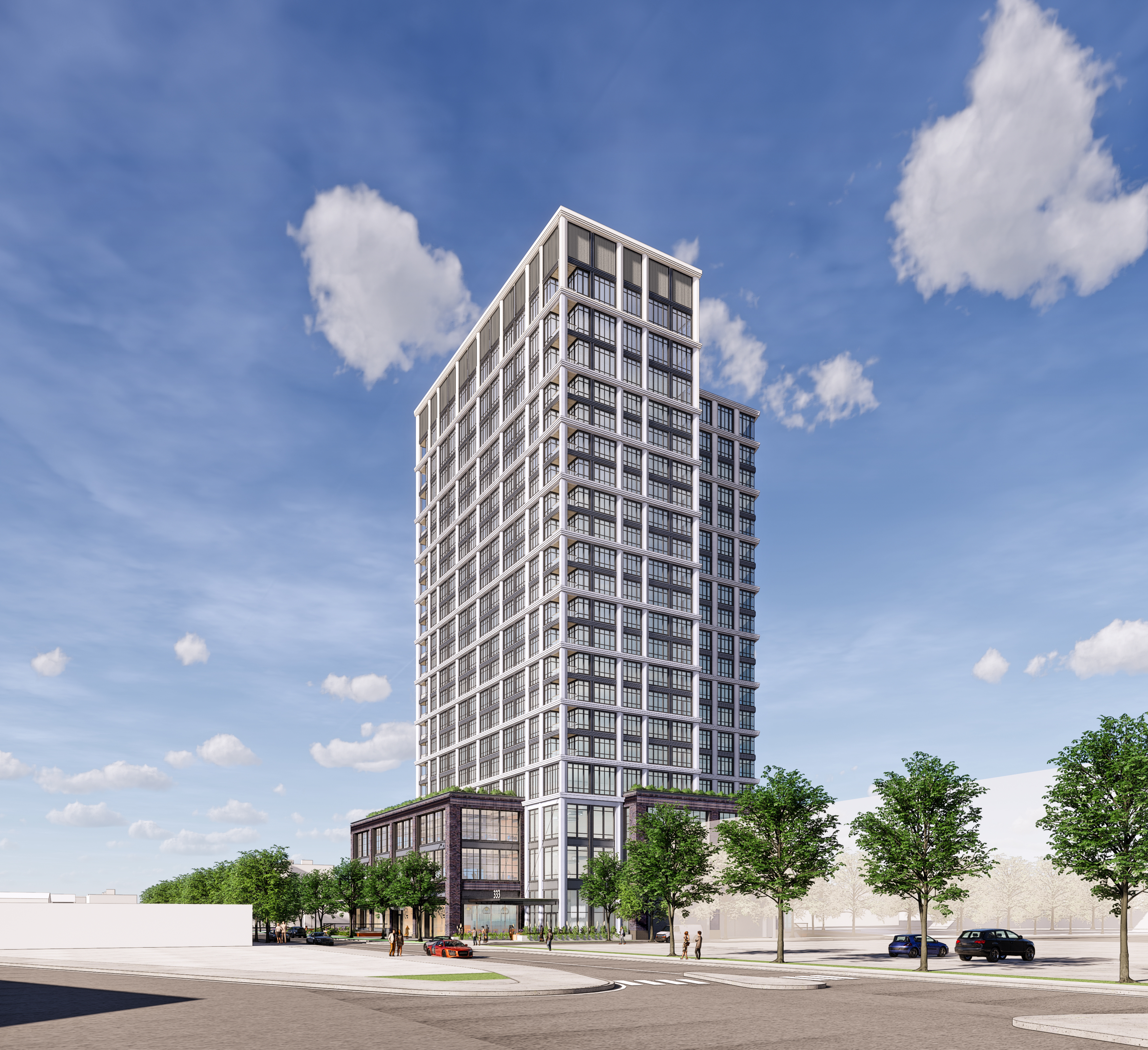 National Development yesterday filed detailed plans and renderings of its proposed 21-story, $210-million residential, office and retail building at 323-345 Dorchester Ave., the first of several buildings it hopes to build on the roughly 5.4 acres it owns on that side of Dorchester Avenue, near the intersection with Old Colony Avenue.

National Development says it will ultimately file a “planned development area” blueprint for the land, which would let it and the BPDA throw out the current zoning and negotiate just what can be built there – although the company says it “intends to meet the Boston Zoning Code dimensional requirements and project parameters as an integrated whole” – but for now is concentrating on just the one building, which would have 265 residential units, 47,000 square feet of office space and ground-floor space for a 10,000-square-foot grocery store and a restaurant, as well as 198 parking spaces in an underground garage.

Redevelopment of the Project Site is part of an effort to create a vibrant, mixed-use neighborhood with greatly needed amenities, job opportunities, and a diversity of housing types.

National Development says it will likely include more affordable housing units than the 13% generally required by the city, under a city rezoning effort along Dorchester Avenue between Andrew Square and Broadway aimed at turning a stretch of low-rise industrial and wholesale buildings into Boston’s next new real-estate hotness. At 254 feet, the building would be several stories shorter than the 300 feet allowed under the Dorchester Avenue overlay zoning.

National Development says it would expand the current 5-foot-wide sidewalk in front of the site to a 31-foot-wide pedestrian and bicycle zone, opening onto a publicly accessible plaza:

Along Dorchester Avenue, an entry garden brings the lush character of the open space to the adjacent public realm. Transitions between the street elevation and the Project’s higher base elevation are mediated with design and program elements. These include stone blocks, serving as both seating elements, steps, and play areas, as well as garden spaces that comfortably separate different elevations. An accessible ramp is seamlessly incorporated into the park design, lined by lower plantings that break the grade separation. Upon completing the grade transition, a pervious seating area is at the center of the open space, under a mix of canopy and understory trees. This area will offer a variety of dynamic lighting and installation opportunities, visible from Dorchester Ave and within the future project area, serving as a draw through the open space. Further into the space, a flexible lawn area connects back to the interior of the Project Site and the future Ellery Street roadway. This area is a key focus for additional activation opportunities within and around the space throughout the year. Community activities such as movie nights, markets, and seasonal festivals, as well as an integrated fitness network that could extend throughout the corridor all have been considered during space planning and design.

The Proponent is working with the surrounding residential and business community to identify how programming and open space design can further support a vibrant, engaged neighborhood.

The filing discusses how the company’s architect’s came up with the exterior design:

The Project’s podium is proposed as a textured iron spot brick with varied tones of purple paired with factory style-sash windows. The deeply hued brick palette provides a complementary contrast to a lighter precast concrete in the tower above. The solidity of the podium’s masonry piers is balanced by floor-to -ceiling windows and retail storefronts. Pedestrian zones immediately adjacent to the ground floor are covered by a gracious canopy that provides protection from inclement weather and enhances outdoor seating zones. The canopy is proposed as steel and wood decking, maintaining the industrial palette. Wrapping the building’s ground floor, the canopy provides an intimate scale to the retail storefronts and lobby entries. …

The tower’s façade introduces a light colored, profiled precast grid that creates depth and varied shadow as the sun moves across the sky throughout the day. The double-height framework reduces the scale of the tower and provides visual interest. Strong horizontals with stepped profiles define the primary tower form, while a varied rhythm of triangular profiled verticals allow for open corners on the smaller, westerly tower. Within the dominant precast frames, a secondary grid is introduced at the slab edges with a corrugated profile at the horizontal spandrel. The integrity of the frame is maintained while the glazing moves in and out of plane with the precast to accentuate depth. Elegant in its articulation and proportions, the clean-lined geometry of the precast grid feels distinctly modern.

The company hopes to begin 30 months of construction this fall.

As Boomers Age, 55-plus Communities Increasing in Central Mass.