Home » ‘What is Public Art Even For?’ New Works Suggest a Transformation on Culture and Shared Space

‘What is Public Art Even For?’ New Works Suggest a Transformation on Culture and Shared Space 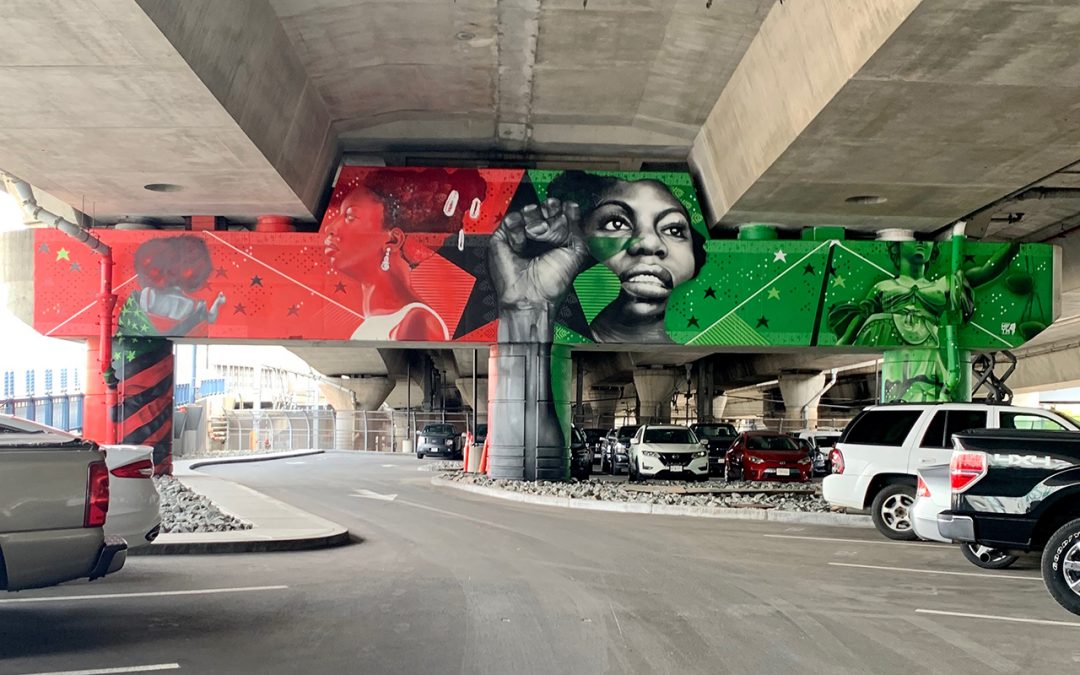 It was a dark void for months, this city of ours. Streets empty, sidewalks clear, parks and playgrounds closed. If not for the scattered glow from the doorways of essential services — grocers and drugstores, sanity-saving takeout food — you’d have believed in mass extinction. And as the pandemic peaked, the desolation was punctured now and then by calamity, with the howl of sirens en route to hospitals.

Life, slowly, has returned with people on patios and in green spaces, masked and distant as they are. But there’s no question that the idea of cities — as places to mix and mingle, where a happily chaotic stew of humanity serves up possibility — has been changed. How we even navigate cities is up for grabs — if we linger, or what to even do there as offices sit vacant and apartment and condo dwellers remain stacked in their homes, hostage to the health threat. It’s a reckoning we’ve barely started to get our hands around.

Faced with massive change, is it nitpicky to talk about public art? It’s easy to see it as less than urgent, but wait. As Black Lives Matter protests seized the country this spring, it’s no coincidence that one of the obvious fixes became the monuments to an old order scattered generously in major urban centers. Confederate generals in Southern cities are one thing. Here in Boston, the decision to remove a statue of Lincoln (who appears to patronizingly bestow freedom upon a slave crouched at his feet) is quite another. It raises the question of how “public” public space has ever really been — a place for all, or some? And as thinking moves forward into an unsteady future, what needs to change?

Horizons for change are usually long, which leaves us wondering what to do in the urgent meantime. That’s what fell on the Boston nonprofit Now + There, which had just welcomed a new cohort to its Public Art Accelerator program when the pandemic hit. The six artists joined the program to work on scaling up their ambitions in what, at the time, was a robust and thriving urban landscape. The program would give them the experience and the means to take the next step. Then, everything collapsed.

“I think we really hit a wall,” said Now + There’s executive director, Kate Gilbert. “There were so many questions for us. I mean, how large does this need to be right now? What is public art even for? “

As we spoke, we were in Roslindale’s Adams Park, with its stony monuments standing as symbols of the time before. Gabriel Sosa, one of the 2020 Accelerator artists, joined us, too. Across the road, perched on a billboard atop the library, was what came of Sosa’s pandemic-tinged Accelerator experience: “IT AIN’T EASY, BUT KEEP GOING” read big red letters on a canary yellow background, towering overhead.

It was installed late last month, the second of many billboards to start appearing all over the city in English and Spanish, an acknowledgment of the crisis’s disproportionate impact on immigrant communities and people of color. (Sosa’s first piece, “NO ES FÁCIL, PERO NO TE DESESPERES,” is near East Boston’s Meridian Street Bridge.) There’s context to be read here, obvious and not. No, easy it ain’t, with a lethal virus in the air and economic devastation all around. But the piece isn’t intended as simple encouragement. It plays with ideas around advertising and sloganeering; given its context, it might be read as a deliberately mysterious, watch-this-space sales pitch. But at its root, it’s a big, loud acknowledgment of widespread pain. “As the pandemic set in, I kept coming back to the question of ‘What can artists offer right now?’” Sosa said. “The truth is, art isn’t going to save anybody from this. But if we can offer some moment for critical reflection, or just a gesture of solidarity — that’s what I gravitated toward.”

As the pandemic progressed, Now + There underwent a soul-searching pivot, holding weekly online conversations less about high-minded notions of public culture than the nuts and bolts of wellness and mental health. It dug into communities, engaging activists and hosting empathetic, honest conversations about problems with no solutions. It was a time of helplessness, but also clarity, Gilbert said. Now + There projects rolling out this fall and winter include Shaka Dendy’s “Blutopia,” recasting Boston Common in icy blue light by replacing white bulbs along the walkways. It’s a subtle intervention with profound effect, transforming not the space so much as the experience of it. Dendy intends the piece as a tribute to Black culture and history, but it’s also a much broader emblem of a world that looks no different, but is in the throes of radical, painful change.

Like Sosa’s work, “Blutopia” fits into that ethos of public art finding its place in a strange new world. When I suggest that maybe what nobody really needs right now is an esoteric object plunked on the grass in a public park, Gilbert nodded. “What I think we all need,” she said, “is to continue the dialogue we’re having, and bring them more into civic space.” (Another Now+There project, Sari Carel’s “Shape of Play,” arrived in the North End’s Waterfront Park this week; it’s a colorful wood-block sculpture that gently emanates soothing sounds.)

One of the many — many — things made clear by the pandemic is who has a platform to speak and who doesn’t. Public art, despite the process of community consultation for most projects, is a traditionally one-to-many approach. Walking the Greenway, it felt like a bit of a throwback to see one of those esoteric-objects-on-the-lawn, recently installed, a sculpture by the British-Ghanian artist Yinka Shonibare. A twist of pattern and fold — Shonibare’s work often uses Dutch colonial fabric patterns absorbed by West African nations, with whom they’re now more closely identified, as a symbol of insidious colonial infection — the piece is glossy, gorgeous, and strange. It’s a loaded symbol of so many of the social ills we’re grappling with right now, but in a time of hunkering down, picking up, and dusting off, it felt unnecessarily grand and universal. Don’t get me wrong: I love Shonibare’s work as a whole. But this felt like a piece for where we were and may again be — just not where we are.

In the midst of the pandemic, the City of Boston found itself putting out its annual call for “transformative” public art projects, meant to be temporary and for the summer. What was instead transformed was the city’s own process. “The restrictions on gathering really threw us for a loop. What does it mean to put something out in public space? And what is public space really for?” said Kara Elliott-Ortega, the city’s chief of art and culture. “It couldn’t just be plopping something in public space. That just feels anachronistic right now. We didn’t feel like we could issue a call for temporary art without inviting those questions.”

What that meant, practically, was following artists back to where they (and the rest of us) were hunkered down: at home, and online. More important was the empathetic nature of their responses. Lily Xie and Crystal Bi Wegner created a “Chinatown Story Cart,” gathering stories and drawings from the community (by mail and by Zoom) and posting them on the street. Liz Lamanche’s “Distance Whispering” is an interactive — but no-touch — sculpture that connects people in conversation at a safe distance. Chanel Thervil gathered up stories of how people of color managed the pandemic and gave them form via collage, drawing, and sculpture for her “Quarantine Self-Care Series” project. (That’s just three of the city’s 24 projects.)

When it came time to put out the call, “we were asking about public connectedness, about ritual — what the things are that can bring people together and create those points of meaning,” Elliott-Ortega said. “I think what we got back was really amazing, and it made us think. It wouldn’t really make sense to just go back to temporary art exactly how it had been, even if all of this goes 100 percent back to normal at this time next year. It feels like a departure point.”

If not materially, then surely philosophically. A lot of public art is pretty — distracting, decorative pablum, though that’s been changing for years. The pandemic, and the social justice issues it brought forward, make the slow burn of change a sudden inferno. Messages become more blunt, change more urgent. At Underground at Ink Block, the evolving outdoor street-art museum under I-95 in South Boston, artists have been chipping at issues of race and inequity for years.

The newest piece, finished just a few days ago, is as blunt as can be. Spanning the full width of a highway trestle in blood red and deep green, faces and figures and stars and stripes tangled within, it’s called “Don’t Let Me Be Misunderstood,” a tribute to the civil rights activism of Nina Simone in the 1960s by Victor Quiñonez and Rob Gibbs (or Marka27 and ProBlak, respectively). “We’ve been doing this kind of work for decades,” Quiñonez said, “so it pains us that we have to continue doing it, to be honest with you. The title of that mural? It speaks volumes as to how long this has been going on. Police brutality, mass incarceration — this is nothing new. Why do we keep going in circles? Why is this so hard to understand?”

“Don’t Let Me Be Misunderstood” is one of the first projects for Murals for the Movement, a grassroots initiative Quiñonez and his partner, Liza Quiñonez, founded to encourage social justice-driven murals nationwide. It reminded me of the For Freedoms project, a national billboard initiative around social justice founded not long after the 2016 presidential election by Eric Gottesman and Hank Willis Thomas (the artist who won the Martin Luther and Coretta Scott King memorial commission for Boston Common, slated for a 2022 debut). Murals for the Movement carves an important distinction: It solicits works from artists who live in the cities and neighborhoods where pieces are installed, letting them speak directly to their own communities.

That kind of localism has long been anathema to the more rarefied strata of public art hierarchy. That’s always been wrong-headed, something never more clear than right now. It makes me think that maybe public art has been let off the hook for too long, leaving questions unanswered, floating in space and not moored to its particular ground. Public art will shift and change again, that much is sure. But here, in a social and civic landscape mired with disease both physical and social, it’s time for some straight talk: What do people need? That’s a hard question to answer. Until now, it’s been even harder to ask.